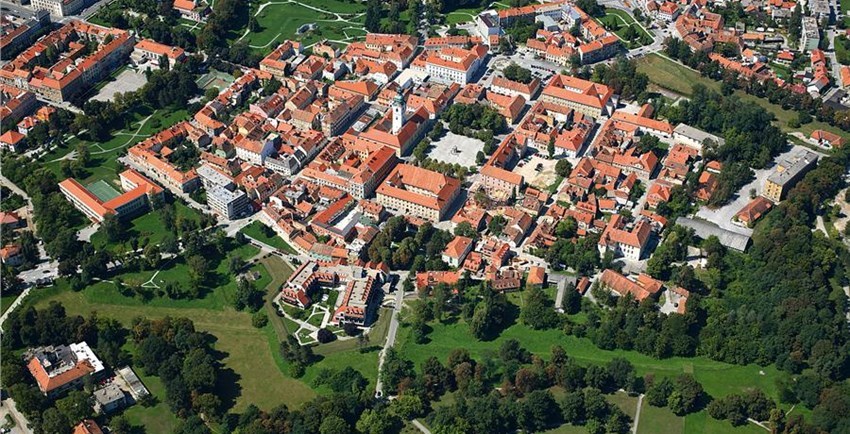 
The city of Karlovac was built on the edge of the Pannonian Plain in times when the border of the Ottoman and Habsburg Empires was formed along the Rivers Kupa and Korana, southwestern tributaries of the Danube basin. It is situated near their confluence and at the edge the Kupa's waterway. Located about a hundred kilometers from the Adriatic coast, Karlovac became all the more important as a significant thoroughfare, because some of the previous routes between the coast and inland, often based on ancient  routes, had been cut off.

Driven by the Ottoman threat, the political changes in the 16th century were profound and far-reaching. In 1527, Croatia became part of the Habsburg Empire, and a defence system was built on the remnants of its territory. From 1578, a part of the area around the River Kupa (Pokuplje) and the area south of it, known as the Croatian Military Frontier, was administered by the War Council in Graz, led by the Habsburg Archduke Karl II of Styria after whom Karlovac was named. Karlovac was particularly important for the defence of the lower lands of Austria, which helped in providing finance and manpower for building, and the new city-fortress was the command centre of a military organisation. In addition to military troops, there were craftsmen and traders and military engineers, together with Croatian nobility, all participating in the maintainance of  a very dense network of castles, fortresses and watchtowers that extended all the way to the Adriatic coast.

Karlovac remained a border town until 1699 when, after the Peace of Karlowitz, the border moved from the River Korana to the River Una. It then became a military and administrative centre of the newly liberated areas. The Military Frontier was gradually transformed into a military province whose troops were involved in numereous European wars. The opening of trade routes between the Danube and the Mediterranean was advantageous to local merchants and craftsmen, and Karlovac became a free royal city in 1781. From the port of Karlovac, grain was transported in horse-drawn wagons along what were, for the time, very modern the roads, to the sea ports of Rijeka, Bakar and Senj. However, the continued maintenance and upgrading of the defence systems shows that Karlovac was crucial in geo-strategic considerations long into the 19th century, and not only in the context of the conflict with the Ottomans.

The oldest plan of Karlovac bears record to the date when construction, or more accurately earthworks, began on a previously undeveloped area at ​​the confluence of the Kupa and Korana Rivers: 13th July 1579. On the time line of the development of Renaissance polygonal ground plans, this date positions Karlovac as the first newly built town, with an unprecedented degree of geometric regularity and symmetry. The six-pointed star has a bastion system derived from the inner polygon, with a radius of 120 Viennese fathoms, and an orthogonal street grid. The bastions are of a so called new Italian type, with indrawn flanks. Unusually, there is no direct connection between the central square and either the city gates or the bastions, nor was it usual the position two city gates next to the flanks of the bastions. With the main square in the centre, larger city blocks are so arranged as to form a cross. Such explicit use of symbols and signs in the layout is a characteristic of the Mannerist period of the Renaissance, here on an urban scale, and on the very border of what was then the Christian world, which popes and emperors commonly called Antemurale Christianitati (the bulwark of Christianity).

The architect of Karlovac is unknown. The latest proposal for attribution (Zlatko Uzelac, 2013) is in favour of Giovanni Sallustio Peruzzi, who was, from 1567 until his death in 1573, in the service of the Habsburgs. Like his famous father, Baldassarre Peruzzi, Giovanni had previously worked for the Pope in Rome, so it is likely that he was sent  as an envoy. Furthermore, his father was a student of Francesco di Giorgio Martini, a Sienese architect credited with the invention of the bastion, and a crucial figure in the development of polygonal fortifications. As  building supervisor Peruzzi was succeeded by Giuseppe Vintana, while Martin Gambon was charged with the execution of the works in Karlovac.

The idea of a star-shaped ideal city had existed for more than a century before the construction of Karlovac, first in treatises on architecture, then in the regulation and remodeling of existing cities. Karlovac was not recognized in this discourse at the time of its foundation, and is still little recognised today. Except in its ground-plan,  the city-fortress in Pokuplje has long lacked any other representative features of style. Nor was its initial construction customary for the Italian architectural tradition, partly because of lack of funds, partly because of its rapid pace. The bastions and curtain walls were made ​​of earth and not of stone, about which builder Martin Gambon was to complain. Although it was well-known that earth, as a soft material, resisted artillery attacks very well, as was confirmed especially by the Dutch tradition of building, the Karlovac bastions initially had a typically Italian form that was difficult to execute with an erosive material, and which therefore was later changed.

The plan from 1646 shows that the flanks of the bastions are straight, no longer indrawn, which mitigates erosion. Other changes prioritise defence functions over stylistic representation. There is a covered way along the outer side of the moat, with places of arms in front of the curtain walls. With the addition of the glacis, the entire defensive front became twice as wide. The street grid was expanded and complemented towards the periphery, which makes the inner cross less readable.

More than the remaining structures, the documentation drawn up by the military engineers testifies to various additions to the bastion system, as well as to never executed proposals and abandoned projects. The increasing range of artillery required the application of new fortificational elements and the expansion of the defence zone, even on the opposite banks of the rivers. Moreover, with the approval of the court military council headed by Eugene of Savoy, there began in 1733  the construction of a new fortress, Orlica, by the left bank of the River Kupa, near its confluence with the River Korana, the location being pinpointed four years previously on the recommendation (and possibly according to the design) of the famous military architect, Nicolaus de Doxat Demoreta. The project was soon abandoned due to a lack of funds and new strategic priorities. The defence was not based on the bastion system but on the Tenaillensystem (a saw of triangular teeth). By all accounts, for the second time in history, this part of the Kupa basin was to be the site of an early application of what was then an innovative building solution. Larger in size than the Karlovac star or any other fortress ever built on Croatian territory, Orlica was to be brick-built, thereby stimlating brick production in Karlovac.

Attention was then focused again on the Karlovac star. On several ocassions the front was expanded by the use of fleche (arrow like additions) protruding from  the tips of the glacis. In the moat, in front of the curtain wall which contained the so-called 'Turkish gates', there was built a ravelin, the remnants of which still exist today. A suburb by the River Kupa was fortified, which also regulated the supply of water from the Kupa into the moat and the drainage thereof in the opposite direction. Finally, several bastions and curtains were walled in stone, but only in the foot.
Frequent floods have affected not only the erosion of the bastion system but also the shaping of an urban fabric that was often exposed to water. Behind the city gates overlooking the River Kupa (the Viceroy's gate) there was a square that has been extended, that is, curved towards the throat of the bastion, and the area behind  the curtains was occupied by rows of houses. Most  were wooden houses with narrow sides facing the street, mutually spaced out so that there were narrow passages into the interior of blocks. There were a few mansions and military buildings built in stone, while brick-built powder magazines were located on the bastions. Concerning the use of a symbolic layout and its positioning in the urban network, the most interesting accomplishment was the chapel, raised in 1680 by the Karlovac general and Maltese knight Joseph Hreberstein. This central building with a dome was located on the surface of the square mentioned above (today Strossmayer Square), in the corner of a peripheral block that formed the cross in the urban network. If there was already an irregularity in the urban grid, it was probably still considered to be only a temporary situation. Besides, the very layout of the chapel had a symbolic meaning:  it features a Maltese cross, as a memory of the "knight on the bulwark of Christianity". Today, only the foundations remain of the chapel where Heberstein was buried, situated opposite the mansion in which he lived.

However, in the late 1730s the city finally acquired its new baroque appearance, naturally still robust and military in character. In the second half of the 18th century, the main square was built as a typical Paradenpaltz (Piaza D'Armi), with large barracks and an arsenal occupying whole city blocks. On the main square, the Franciscan monastery and the church were expanded and equipped, and in the spirit of the religious tolerance which  marked the reign of Joseph II, an Orthodox church was built. Concurrently, the citizens of Karlovac erected more representative houses and mansions, and the first city hall was also erected.

But it was only in the 19th century that a new commercial and civic class managed to create  its own city panorama with new housing and public buildings, in the inner city and its surrounding suburbs, rendering the bastion system undesirable. After the abolition of the military border in 1881,  fortification  structures were removed, and a green, horticultural ring created, in which the star-shape could still be discerned, mostly due to the remnants of moats, in other words the park areas below street level. After the First World War and consequent political changes, building practice became all the more invasive, partially occupying the space of the former curtains and bastions, mainly on the side of the River Kupa. The fact that many of the historic military buildings were used by the Yugoslav armies prevented the rebuilding of approximately half of the bastion front facing the River Korana. The 400th anniversary of Karlovac can be considered a milestone, because for that occasion the Zagreb Institute of Art History carried out an analytical study in which the historic core of Karlovac was deignated as cultural heritage, even though this did not mange to solve problems related to the remains of the bastion system, and generally had too little influence on contemporary urban and architectural practice.
Pitaj Koranu
Virtualna asistentica Korana