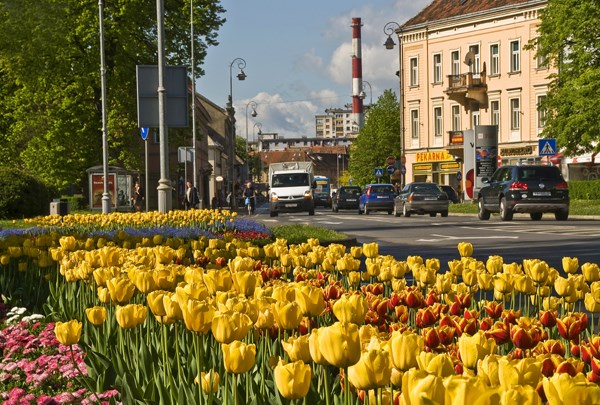 Location:
45° 29' 34'' N
15° 33' 31'' E
City area: 402 km²
Elevation: 112- 177 MNV
Climate: moderate continental climate
Population (as of 2011.): 55 705
City birth date: July 13, 1579
City protector: St. Joseph
City colour: blue-green (aquamarine)
Located in central Croatia at the meeting point between the Croatian lowlands, Croatian highlands,  Pokupje and Kordun. Karlovac is framed by four rivers - Kupa, Korana, Dobra and Mrežnica. Since it is located at the narrowest part of Croatia, it is only 50 kilometres away from Slovenia and from Bosnia and Herzegovina. As a city, Karlovac has an important traffic and economic significance.

The city of Karlovac is one of rare cities that know the exact date of their creation. For Karlovac it is July 13, 1579, when it was founded and named by its founder, archduke Karl von Habsburg. It was marked by the beginning of construction of the Karlovac border military fort built for the purpose of defence against the Turks. Every year on July 13, the city of Karlovac celebrates its birthday, which is celebrated by the birthday ball on Trg bana Josipa Jelačića square, and with the celebration session of the City council and awarding of public recognition awards. The patron saint protector of the city is St. Joseph, whose holiday is celebrated on March 19th, and the central festivities are held at the church of St. Joseph in Dubovec - the national shrine.

Karlovac received its first city management in 1778, and in 1781 emperor Joseph II awarded the city with a charted proclaiming Karlovac a free royal city. Karlovac is an example of a city founded according to leading construction ideas of its time; Renaissance, geometrically regular form of a six-pointed star. Along the rim of the fortress, in accordance with urban solutions, during the 19th and 20th century it was decided to build city palaces, cultivate parks and gardens. Thus Karlovac became, and still is until today, an ideal renaissance city and at the same time a hexagonal bastion fortress with a rectangular city grid. It is this look that makes Karlovac a rarity in Europe.

Since its founding until this day, Karlovac has always developed around roads connecting Europe with Adriatic ports. Witnesses that remain even today are historical routes Karolina, Jozefia and Lujzijana, pathways which enabled Karlovac of the past, but also modern Karlovac to become an important commercial and traffic centre. Karlovac is located less than 50 kilometres from Zagreb, the capital of Croatia, and about 90 kilometres from the port of Rijeka. This favourable geographic position can also be seen in relation to other capital cities of the region. Ljubljana is only 104 kilometres in a beeline. Sarajevo is 386 kilometres away, Budapest around 400 km. Even the capital of Austria - Vienna is only 410 kilometres from Karlovac.

Karlovac is a city built and thought out taking full advantage of its surroundings: In green valleys of four rivers, beneath the Dubovac old town, filled with hundred year old parks and promenades, bicycling routes, deeply rooted in traditions of culture, sports, trades and commerce. Inevitably, with such parameters Karlovac is an European formula for pleasant living and business investments. Karlovac is unique in its business and development possibilities. Situated at the crossroads of the most important Croatian and European highways and extreme vicinity to the two bordering countries - Slovenia and Bosnia & Herzegovina, Karlovac holds great potential.

Business zones have been developed on the outskirts of the city, leaving the city centre conserved for a whole array of tourism and service industries, housing, sports and recreational development possibilities.
Pitaj Koranu
Virtualna asistentica Korana